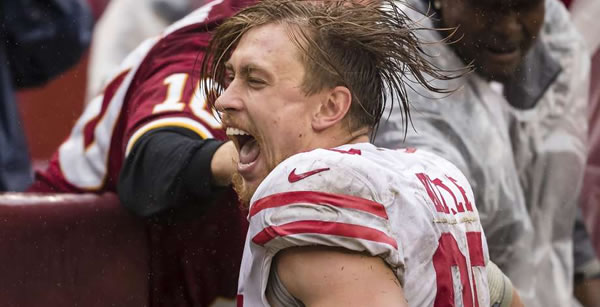 By the time Sunday's AFC and NFC title games roll around, the top online sportsbooks will be offering a grocery list of game, team, and player prop bet options. Over the past several years, betting props has become almost as popular as betting on the actual outcome of the games themselves.

The bigger the game, the longer the list of prop bet options. Nothing tops the list of different bets you can place on each season’s Super Bowl. Yet, the two conference championship games would be next on the list.

It is very easy to get carried away betting game props. One strategy is to link your prop bets to any actual game bets as a way to hedge all the action you may have in play. The other strategy is to keep things as simple as possible in search of the best value in the props you bet.

BetOnline is one of the best online sportsbooks for betting NFL props. Turning to an early prop bet option on the board, there is some substantial value to be found in a player prop for who scores the first touchdown in each game.

The betting odds for this prop lean towards each team’s top running back to score the first touchdown. Kansas City's Damien Williams is the favorite at +500, followed closely by Tennessee's Derrick Henry at +550.

Chiefs' tight end Travis Kelce is next on the list at +600, followed by KC wide receiver Tyreek Hill at +700. The Titans' top wide receiver AJ Brown rounds out the Top 5 at +1000 odds. There are an additional 22 options on the board, including each team's defense/special teams, as well as +6600 odds that no touchdowns will be scored.

Betting this prop is all about how you see things playing out in the first quarter. If you like Tennessee to take the early lead, take the high value in Derrick Henry's odds. I think the Chiefs get off to a fast start in this game, go with Travis Kelce as the No. 1 Red Zone target.

Stretching the odds for this prop, both team’s quarterbacks (Patrick Mahomes for Kansas City and Ryan Tannehill for Tennessee) have +2500 to post the first TD.

The prop bet odds in this conference matchup between Green Bay and San Francisco favor the Packers’ top running back Aaron Jones at +650 odds. Next at +700 a trio of 49ers’ players that include tight end George Kittle and running backs’ Raheem Mostert and Tevin Coleman.

The heavy skew towards San Francisco players adds more value to a 49ers’ pick. Kittle led the 49ers in touchdown catches in the regular season with five, and he is another big target close to the goal line.

The top-valued pick on the board could be Green Bay's Adams at +900 after catching two Aaron Rodgers' touchdown throws in last Sunday's win against Seattle. If you are looking to take a flyer at much longer +2500 odds, San Francisco quarterback Jimmy Garoppolo could be a solid choice. Rodgers is on the board at +4000.